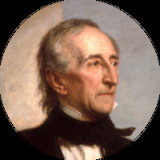 John Tyler, the 8th president of the United States is my 5th cousin 6x removed. That ancestor that we share is Robert Booth (1610-1657), my 10th great grand father.

John Tyler was the 10th president of the United States from 1841 to 1845 after quickly serving as the tenth vice president; having been selected to the latter office on the 1840 Whig ticket with President William Henry Harrison

The genealogical chart which shares both our ancestor: