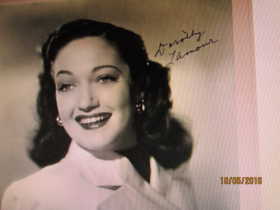 Dorothy Lamour is my 7th cousin 3x removed. The ancestor who connect us together is Richard E. Perrin Sr (1637 – 1695), my 9th great grandfather.

Mary Leta Dorothy Lamour was an American actress and singer. She is known for appearing in the Road to… movies, a series of successful comedies starring Bing Crosby and Bob Hope. Lamour began her career in the 1930s as a big band singer.