John Quincy Adams is my 14th cousin 1x removed. The ancestor who connects us is my 14th great grandfather, John of Gaunt. 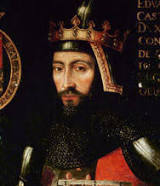 John of Gaunt, Duke of Lancaster (6 March 1340 – 3 February 1399) was an English prince, military leader, and statesman. He was the third regarding the five sons of King Edward III of England who survived to adulthood. Because of his royal origin, advantageous marriages, plus some generous land grants, Gaunt was among the richest men of his era, and an influential figure during the reigns of both his father, Edward, along with his nephew, Richard II. As Duke of Lancaster, he is the founder associated with the royal House of Lancaster, whose members would ascend to your throne after his death. His birthplace, Ghent, corrupted into English as Gaunt, was the origin for his name. As he became unpopular later in life, scurrilous rumors and lampoons circulated that he had been actually the son of a Ghent butcher, perhaps because Edward III was not present at the birth. This story always drove him to fury.